The biggest reason why Bollywood is such a phenomenon is its mesmerizing melodies since its inception. The period between the 1950s and 1970s is considered the Golden Era of Hindi cinema music. Thanks to the role of poets who, with their lilting lyrics, made this period unforgettable.

One of such poet of this era of Hindi cinema remained a quintessential lyricist all throughout. His name was Shankardas Kesarilal. For the countless admirers of this Kohinoor of melodies, he was simply known as Shailendra!

This sweet soul, whose ancestors belonged to the Ara district of Bihar, was a shy, reticent man, deeply rooted in Indian culture. Born in a poor Dalit family in Rawalpindi (now Pakistan), Shailendra and his family moved to Mathura. Shailendra started writing poetry at a very young age. His familiarity with Bihar-UP folklores and mythological traditions aided him throughout his career. Shailendra moved to Bombay, where he started his career as a welding apprentice with Indian Railways. While he worked at the Matunga Workshop, he continued his engagement with his muse and started attending Mushairas and Kavi Sammelans.

Around this time, IPTA, the cultural wing of the Communist Party of India, became active. Shailendra became a member and began writing socialist-themed poems but never really been open about his Dalit identity. In one such Mushayra, Shailendra took the stage by storm, reciting a poem on partition – “Jalta Hai Punjab” – that not only earned him literary acclaim but became his ticket to success.

Raj Kapoor (RK), who was planning to launch his first feature film – Aag, was pretty impressed by this young poet. He approached and offered to buy the poem he recited. Comrade Shailendra told him curtly, “I don’t write for money, and I see no reason to be writing for your film.” A visibly hurt RK told him: “All right, come to me when you feel like it. You’re always welcome,” and left.

Cinematic Entry into the World of Cinema:

When his wife Shakuntla was pregnant, the legend suggests that Shailendra wanted her to go to Jhansi (her parental home) and deliver her first child. Shakuntla was ready to leave, but Shailendra was penniless, helpless, and annoyed. Suddenly, he remembered Raj Kapoor’s words of appreciation. Utopia met reality. Apprehensive and hesitant, he met RK, who helped him with five hundred Rupees, the amount Shailendra asked. While leaving, Shailendra said, “I will return the money soon with interest.” Raj Kapoor replied: “Offering money to needy on interest is not my business.”

At this point, RK asked Shailendra that he needed a title song along with one more number for his next film. The music for Barsaat (1949) was composed by Shankar-Jaikishan (SJ). The lyricist in the poet came in flying colours. Shailendra wrote two songs: the evocative number “Barsaat Mein Humse Milein Tum Sajan” and “Patli Qamar Hai, Tirchhi Nazar Hai.” The trust and confidence of RK in selecting Shailendra proved distinctive. Both songs were super hits that immediately and emphatically established Shailendra as an eminent songwriter.

Shailendra remained a poet first and lyricist later. A few Hindi poets like Gopal Singh Nepali, Pradeep etc., had ventured into song writing, but Urdu writers dominated the Hindi film industry. Stalwarts like Majrooh Sultanpuri, Hasrat Jaipuri, Sahir Ludhianvi, Kaifi Azmi dipped their ink in Urdu and Persian, a language not commonly used by the masses. It was Shailendra who broke this practice and brought Hindi to the forefront.

Shailendra had the most extensive vocabulary ever in Hindi film songs and usually came up with unusual imagery. The simple words having profound and meaningful philosophies of a commoners life immersed in the lyrics carried the feelings of the masses. Shailendra’s hallmark was his ability to write songs that were easy to sing and understand. It made Shailendra an instant success as millions hummed his songs without looking for the dictionary. At that time, the Indian republic was new and optimistic. Shailendra’s songs pristine quality added vigour and zeal to Hindi cinema, which was evolving in the age of idealism.

After initial success, RK took Shailendra to Khwaja Abbas, the story and screenplay writer of most of the RK banner for him to narrate the script of Awara (1951). When Abbas looked at the frail figure of Shailendra after finished telling the story, he didn’t take him seriously. RK also turned to Shailendra and asked if he had understood the gist.

Abbas was taken aback and later confessed to RK that he could not convey in the whole two and half hours; the boy could tell in two lines.  It was also one of the first Hindi film songs to go international and become the signature song of RK.

Those days composers selected lyricists and recommended them to producers. SJ once promised Shailendra that they would recommend him around for projects outside the RK banner too. However, the promise was not materializing. Shailendra sent a note to the duo with these lines: 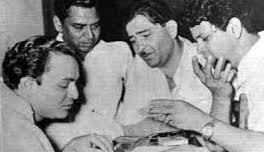 The composers got the message, and since they worked together to create 400 songs in 70 films. Later, the duo requested Shailendra to complete the verses on the chit, which featured a song in Rangoli (1962) in Kishore Kumar’s voice. Shailendra wrote plenty of songs for the RK banner composed by SJ, and the troika became a grand success. The team worked their magic in evergreen albums.

Shree 420 (1955): All songs of this film were super-duper hits. Few songs evoke patriotism, like “Mera Joota Hai Japani“, which became an anthem for India’s common men. If there’s is a lilting vivacity of unadulterated love in “Pyar Hua Ikraar Hua Hai,’ his masterful craft ‘Dil Ka Haal Sune Dilwala‘ narrates the genius of  Shailendra’s ability to portray the darkest reality without losing the inherent joy of life. The cabaret number – “Mud Mud Ke Na Dekh” is said to be written when Shailendra caught Shankar admiring a young girl passing by the car. They were full of life.

Be it “Ye Shaam Ki Tanhaaiyan,” and “Raaja Ki Aayegi Baraat,” from Aah (1953), or “Yeh Raat Bheegi Bheegi” and “Jahan Main Jaati Hoon” from Chori-Chori (1956), they all had simplicity of life stamp over them. But for me, the two songs – “Sab Kuchh Seekha Hamne Na Seekhi Hoshiyari” and “Kisiki Muskuraahaton Pe Ho Nisar” from Anari (1959), concludes the life philosophy of the lyricist.

In a career spanning 17 years, Shailendra wrote about 900 songs. Barring Naushad and O.P. Nayyar, Shailendra worked with almost all the leading composers of the era. Apart from Raj Kapoor, he also shared a rapport with great filmmakers like Bimal Roy. Together they had runaway hits like Madhumati, Do Bigha Zameen, Naukri, Yahudi, Bandini, & Sujatha. Shailendra’s first work with the Anand brothers of Navketan Films started with Kala Bazaar, and the song “Khoya Khoya Chand… Khula Aasman” created a rage.

Shailendra shared a great rapport with Salil Chaudhary, and the duo produced some gems like “Zindagi Khawab Hai” from Jaagte Raho (1956) and ‘Suhana Safar Aur Ye Mausam Hasin‘ that captures both the dramatic visuals as well as the essence of Bimal Roy’s haunting tale. With compositions like “Dil Tadap Tadap Ke Keh Raha Hai,” “Aaja Re Pardesi,” and the folklore – “Chad Gayo Paapi Bichua,” Madhumati (1958) turned out to be the pinnacle of their partnership.

In Daag (1952), with one of the finest ghazals of Hindi cinema – “Ae Mere Dil Kahin Aur Chal,” Shailendra silenced those who believed he couldn’t take to the ghazal form. His bhajan from Seema (1955) – “Tu Pyaar Ka Sagar Sai,” is still sung in schools. Filled with a sense of longing, “Ye Mera Deewanapan Hai” from Yahudi (1958) is a declaration of immortal love brought out perfectly by none other than Dilip Kumar. If the light verses like “Chahe Koi Mujhe Junglee Kahe” from Junglee (1961) spoke of the madness of love, few songs convey the bittersweet pain of heartbreak as effectively as ‘Ajeeb Dastan Hai Yeh‘  from Dil Apna Aur Preet Parai (1960). It is impossible to slot Shailendra into a genre, a style, a mood or philosophy.

After being in cinema for two decades, and Shailendra was deeply motivated to play the biggest gamble of his life. In 1961, he produced the film-‘Teesri Kasam’ based on Fanishvar Nath Renu’s short story, Maare Gaye Ghulfam. Naturally, Raj Kapoor was picked for the lead role with the exemplary Waheeda Rehman, and the directorial job was given to Basu Bhattacharya. For both the producer and the director, it was their maiden attempt. 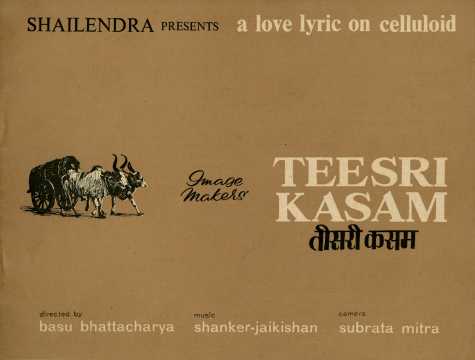 SJ and Shailendra together produced fascinating music. The film contained some of his finest folk-based poetry – “Sajan Re Jhoot Mat Bolo,” “Chithiya Ho To Har Koi Banche,” “Chalat Musafir Moh Liya Re,” “Paan Khaye Saiyyan Hamaro” “Lali Lali Doliya Mein Lali Re Dulhaniya” – each of them were pure gold. The pathos of disappointment with the world is best epitomized in this beautiful song – “Duniya Banane Wale, Kya Tere Man Me Samaayi.” The film was a classic by all standards, and it was estimated that the film’s shooting will be completed in six months. But the destiny of the maestro had some other plans.

Initially agreeing to work for free, Raj Kapoor gave hard times to Shailendra in providing dates. Some say it was because of him writing some timeless classics for both Dilip Kumar and Dev Anand. The relations between the director and the producer also strained. The film took five long years in the making. Easily one of the most popular songs of heartbreak, ‘Dost Dost Na Raha‘ from Sangam (1964), was probably penned when Shailendra was struggling to finish Teesri Kasam.

The delay took a toll on his health as well as his finances. There were no distributors for the movie. With fund shortage and lack of experience, the film was released abruptly in haste after its completion in 1966 without publicity. The film bombed at the box office.

Shailendra’s dreams were shattered. Having found his so-called friends shrinking away, he could not bear the agony of the failure and started drinking heavily. Depression and deteriorating health took their toll, and he passed away on December 14, 1966, at a ripe age of 43 years.   Those days he was concluding the last lines of “Jeena Yahan Marna Yahan” for RK’s Mera Naam Joker (1970).

After his demise, when the cine-critics acclaimed Teesri Kasam in very high esteem, the film received National Award for best feature. Then it became a grand success at the box office, as well. What an irony!

For a lyricist,  the maturity starts after 40 years, but Shailendra, at a tender age, effortlessly adorned the sorrow-happiness of a common man of India like no other lyricist. The poet will be remembered for generations for his immortal melodies.

4 thoughts on “Shailendra – The “Kohinoor” of Hindi Cinema Melodies…” 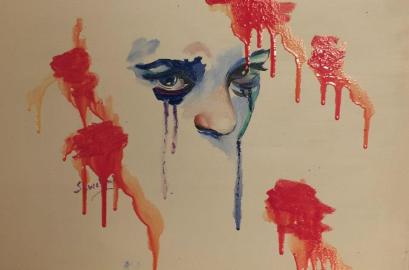 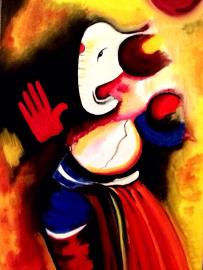 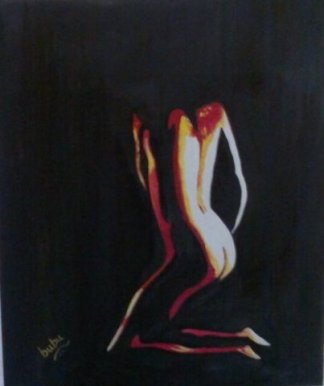 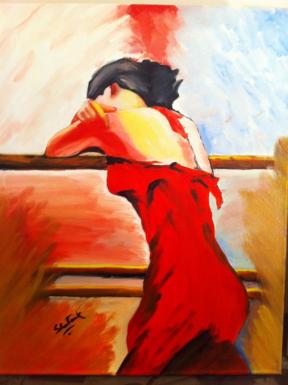 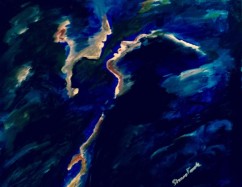 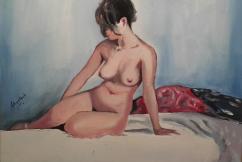 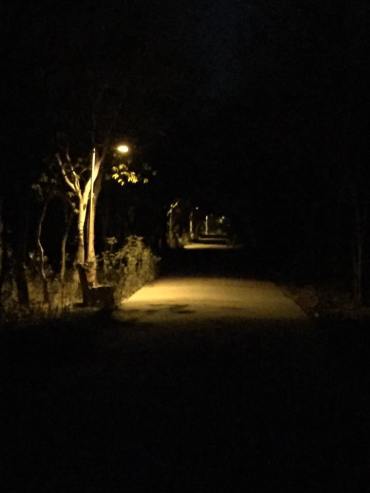