The Prime Minister’s Office will soon issue commemorative coins in honor of Jamshetji Nussserwanji Tata to mark his 175th birth anniversary. Jamshetji Tata will be the first industrialist to be felicitated by the Indian government in such a manner. Previously, the government had honored Jamshetji by releasing postal stamps – one in 1958 and another in 1965. I am proud and glad to hear this. Not because I come from Jamshedpur and studied in schools run and managed by TISCO, but as an Indian. Every fellow citizen would feel elated if they knew who this legend was. Here I will try to keep it as brief as possible, sharing about this legendary Indian, who first dreamt of “Make in India“, despite the hostile investment environment of a colonised India. This is symbolism of the highest order and will certainly enthuse Indian business community.

Jamshedji was born to Nusserwanji and Jeevanbai, a family of Parsi Zoroastrian priests in the sleepy town of Navsari in Gujarat on 3rd of March 1839. His father, Nusserwanji, broke the family tradition and relocated to Bombay, to pursue business opportunities there, and did well, starting off as a small time trader. A graduate from Elphinstone College, Jamshetji was married to Hirabai Daboo, while he was still a student. Jamshetji was quite a bright student and joined his father’s trading firm in 1858, just a year after the Great Mutiny had been suppressed in 1957.

Jamshetji was sent by his father to Hong Kong to expand the business interests there, and he was there for 4 years. During his 4 year stay in Hong Kong, Jamshetji played a major role in expanding his father’s business and consolidating it there. By 1863, Tata & Sons was first set up in Hong Kong, and soon Jamshetji Tata was expanding the business to China and Japan too. After his success in East Asia, Jamshetji tried to set up an Indian bank in London, and he traveled all over Europe for that. However due to the financial crisis prevalent then, Jamshetji’s idea of an Indian bank abroad, did not really succeed and had to be dropped. The failure of the bank, also meant that the Tata Group’s companies all over India and East Asia, had to bear the losses too.

In 1868, aged 29 and wiser for the experience garnered by nine years of working with his father, a merchant banker, Jamshetji Nusserwanji Tata started his own trading company with a capital of Rs. 21,000 and began to work on acquiring cotton mills. On January 1, 1877, the day Queen Victoria was proclaimed Empress of India, The Empress Mill, one of his very successful ventures, came into existence in Nagpur. At the age of 37, J. N. Tata embarked on the first of his fantastic odysseys. The period following the establishment of Empress Mills was the most significant of Jamshetji Tata’s busy life. From about 1880 to his death in 1904, he was consumed by what were the four dream ideas of his life: Setting up of an Iron and Steel company, generating hydroelectric power, and creating a world class educational institution, that would tutor Indians in sciences were primary. A world class hotel was also one of his hidden dream he aspired for.

Bombay, found an enduring place in Jamshetji’s heart. He loved the city, which he had made his home as a 14 year old, and he did plenty to benefit it. Legend has it that Jamshetji set his mind on building The Taj Hotel after being denied entry into one of the city’s hotels for being an Indian. Sitaram Vaidya and D. N. Mirza were the Indian architects for the Taj Mahal Hotel, that eventually opened on Dec 16, 1903. By the time of its completion, the Taj had cost Rs. 4.21 crore. Soaked in luxury, it was the first building in Bombay to use electricity. Jamshetji personally purchased, during his foreign travels, a whole lot of finery that adorns the hotel to this day. During WWI, The Taj Hotel functioned as a 600 bed hospital, and was the first to use steam elevators. During his lifetime though, Jamshedji would only be able to see the dream of a world class hotel come true, the Taj Mahal in Mumbai.

The steel plant though was however a dream, J. N. Tata cherished more than anything else. Jamshetji was an inveterate traveller. Many of his business ideas were born during his travels, and he was quick to bring back to India the technologies he saw abroad. During one of his trips to UK, Jamshetji attended a lecture by Thomas Carlyle, at Manchester, which motivated him to establish a steel plant. The story of how Tata Steel came into being is itself fascinating in many aspects. Though J. N. Tata wanted to set up the steel plant, the obstacles were formidable, the Industrial Revolution had not still taken root in India. The twists and turns the project took would have defeated a lesser man, but Jamshetji Tata remained steadfast in his determination to see the venture come to fruition.

Thomas Carylyle’s quote “The nation that controls iron controls gold too” was said to be chief inspiration for steel plant. Also a report by a German geologist Ritter Von Schwartz about iron ore deposits in Chanda dist, was said to motivate him. Based on a letter by Indian geologist P. N. Bose, about rich iron ore deposits at a village called Sakchi on Subarnarekha river, Jamshetji did a lot of painstaking ground work before setting up the steel plant, studying various processes over the world. Charles Perrin, one of the world’s top engineers in US, agreed to come to India, to help Jamshetji build his dream project. He studied the coking processes for a steel plant at Birmingham, AL and also the ore market at Cleveland, OH. Jamshetji not only had to face a stubborn bureaucracy, but also scorn from senior British officials over his steel plant project. Sir Frederick Upcott, Chief Comissioner of Great Indian Railway scoffed “I will eat every pound of steel, the Tatas make”. When Dorabji later heard this, he commented dryly “if Sir Frederick had carried out his undertakings, he sure would have had some indigestion”. 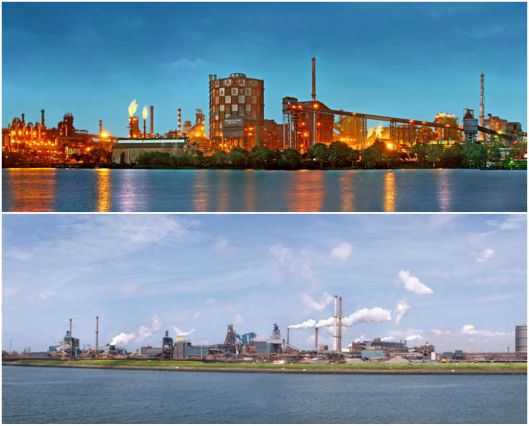 It was not just the steel plant, in a letter to his son, Dorab, Jamshetji also outlined his vision of a township for the employees. While Jamshetji was a philanthropist, he did not believe in charity and doles, rather he felt education was the way ahead. He established the J. N.Tata Endowment in 1892 for meritorious students irrespective of caste, class to pursue higher studies. Jamshetji was one of the early industrialists who believed the welfare of the workers was important, a policy followed by TATAs to date. Medical facilities were provided for sick employees and women with children. On the job training was provided to workers, accident compensation was given, as also provision of pensions. In fact the Gratuity Act and the Provident Fund Act of the Indian Govt. was legislated based on the provisions of Tata Steel’s worker’s welfare and compensation model. He also spelled out his concept of a township for the workers at the steel plant in a letter he wrote to his son Dorab Tata in 1902.

“Be sure to lay wide streets planted with shady trees, every other of a quick growing variety. Be sure that there is plenty of space for lawns and gardens. Reserve large areas for football, hockey and parks. Earmark areas for temples, mosques and churches” …… the letter stated. 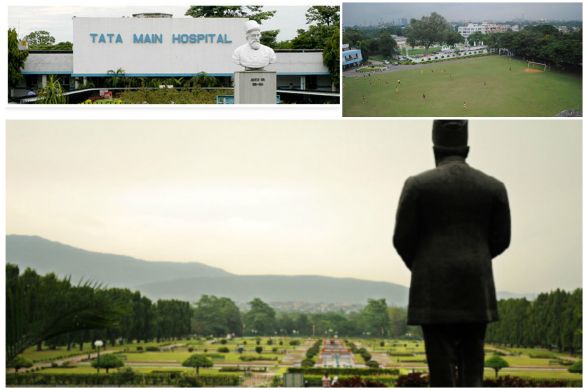 It was only fair that the city born of this sterling vision came out to be called Jamshedpur. The finest city in India, even today.

The Indian Institute of Science :

In 1983, in a boat that sailed from Yokohama to Vancouver, two great Indians, one a monk and the other an industrialist, accidentally met for the first time. The monk was Swami Vivekananda, who was to take and interpret to the West, more effectively than anyone else, the religious and philosophical tradition of India. The industrialist was the father of Indian Industries, Jamshetji Tata. As they got talking, Vivekananda explained his mission of preaching in the U.S., the university of all religions. Jamshedji said he was in search of equipment and technology that would build the steel industry and make India a strong industrial nation. Vivekananda blessed Jamshetji and remarked “How wonderful it would be if we could combine the scientific and technological achievements of the West with the asceticism and humanism of India!” The never met after that journey. But these words struck a chord in Jamshetji’s heart. Five years later, Jamshetji’s response came in a letter to Vivekananda. I reproduce that letter below:

I trust, you remember me as a fellow-traveller on your voyage from Japan to Chicago. I very much recall at this moment your views on the growth of the ascetic spirit in India, and the duty, not of destroying, but of diverting it into useful channels.

I recall these ideas in connection with my scheme of Research Institute of Science for India, of which you have doubtless heard or read. It seems to me that no better use can be made of ascetic spirit than the establishment of monasteries or residential halls for men dominated by the spirit, where they should live with ordinary decency and devote their lives to the cultivation of sciences – natural and humanistic. I am of the opinion that, if such a crusade in favour of an asceticism of this kind were undertaken by a competent leader, it would be greatly help, asceticism, science and the good name of our common country; and I know not who would make a more fitting general of such a campaign than Vivekananda. Do you think you would care to apply yourself to the mission of galvanizing into life our ancient traditions in this respect? Perhaps, you had better begin with a fiery pamphlet rousing our people in this matter. I would cheerfully defray all the expenses of publication.

With kind regards, I am, dear Swami

Impressed by Vivekananda’s views on science and leadership abilities, Tata wanted him to guide his campaign. Vivekananda endorsed the project with enthusiasm, and Tata, with the aim of advancing the scientific capabilities of the country, constituted a Provisional Committee to prepare a plan for setting up of an Institute of research and higher education. The committee presented a draft proposal to Lord Curzon on 31 December 1898.

Jamshetji pledged Rupees 30 lakhs of his own personal property to set up IISc at Bangalore, and sought every one’s assistance. The land and other facilities for the institution were donated by H. H. Sri Krishnaraja Wodeyar IV, the Raja of Mysore and Tata himself. The constitution of the Institute was approved by the Viceroy, Lord Minto and the necessary Vesting Order to enable it to function was signed on 27 May 1909.

Tata Hydro-electric Company generating power was one of Jamshetji’s big business idea, but this project too came into existence after his passing. The firm started as the Tata Hydro-electric Power Supply Company in 1911, which amalgamated with the Andhra Valley Power Supply Company in 1916. It commissioned India’s first large hydro-electric project in 1915 in Khopoli for 72 MW. Then second and third power plants were installed in Bhivpuri (78 MW) in 1919 and Bhira (300 MW) in 1922. Renamed as Tata Power Company Limited, currently India’s largest private electricity company with an installed power generation capacity of over 8000 MW.

Jamshetji however passed before he could see his dreams come true in 1904. Tata Steel, Tata Power and IISc were all completed after his death. But his legacy left a mark on these three institutions. While on a business trip in Germany in 1900, Tata became seriously ill. He died in Nauheim on 19 May 1904, and was buried in the Parsi burial ground in Brookwood cemetery, Woking, England. From the Tata group to Jamshedpur to Indian Institute of Science, J.N.Tata would be remembered as a builder of modern India.

One response to “Jamshetjee Nussarwanjee Tata : builder of Modern India !!”