What Is Rafale Deal Controversy?

In September 2016, India signed an inter-governmental agreement with France, called the “Rafale deal”, in which India bought 36 off-the-shelf Dassault Rafale twin-engine fighters for a price estimated to be Rs. 59,000 crore or 7.8 billion Euros.

The failure of communications on the part of the Modi government aside, it is astonishing that opposition parties led by Congress President Rahul Gandhi and their vile media cronies are severely indulged in unfounded allegations and are mudslinging the government for a contrived Rafale-SCAM.

This would typically not have merited a response but for having the potential of severe damage to the national security by repeatedly perpetrating the misleading, irresponsible statements.

Let us examine the validity of each such claims by understanding the procedure and also breaking down the deal, claim by claim.

Since 2002, the procurement of all major equipment, weapon systems, and platforms has been governed by the Defence Procurement Procedure (DPP).

In 2013 DPP, the UPA government enacted Articles dealing with Inter-Governmental Agreements (IGA). The DPP does envisage situations where it allows procurement under IGAs from “friendly foreign countries which may be necessitated due to geo-strategic advantages that are likely to accrue to our country” and recognizes the fact that such procurements do not strictly follow the standard procurement procedure.

The procurement, based on these IGAs, do NOT require (Cabinet Committee on Security) CCS clearance, just the clearance of a Competent Financial Authority (CFA), the CCS in this case.

The allegation is that no ministry or Cabinet body was consulted before Prime Minister Narendra Modi committed India to the Rafale purchase on 10th April 2015. The fact is that the CCS takes decisions concerning all such acquisitions on the recommendations of the Ministry of Defense (MoD).

The deal is in accordance with the DPP in all aspects including mandating, conducting and monitoring of negotiations and seeking all necessary approvals, including that of the CCS, before entering into the IGA.

Is the Central Government concealing details from the public?

The opposition’s next demand with the GOI is that the “India-Specific-Upgrades” to the fighter jets, be also made public. Now, this is not only unrealistic but utterly foolish. Either they are trying to fool the people or making a fool of themselves.

These details would also come under the ambit of the Article 10 of the bilateral India-France Security Agreement of 2008 signed by the Congress-led UPA Government. The non-disclosure clause is one of the most common and standard clauses in all defense contracts. The clause clearly stipulates that “Except with the written consent of the Buyer/Seller, other parties shall not disclose the contract or any provision, specification, plan, design, pattern, sample or information thereof to any third party.”

Also, it is difficult to recall any such instance of the granular details of the price breakup ever being disclosed.

In keeping with confidentiality requirements, the UPA Government had also expressed its inability to divulge commercial aspects of defense deals, disclose the price of various defense procurements in its responses to Parliament Questions stating, “Divulging details in this regard on the floor of the house would not be in the interest of national security.” 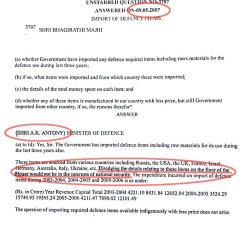 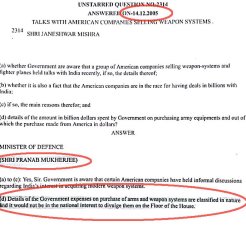 If the Congress party and its crony media houses are now raising these doubts, this is nothing but cheap politics.

Why no reconsideration of Eurofighter’s renewed bid?

In another effort to twist facts, the Government is asked by Congress President, why it did not conduct negotiations with a Eurofighter representing a competing fighter aircraft. It seems to have been conveniently forgotten that the then UPA Government itself had rejected Eurofighter’s unsolicited offer made days after the closure of the bid process, and declared Rafale Dassault (DA) as the L1 bidder and had commenced negotiations with it in February 2012.

Why only 36 fighter aircrafts ordered against 126 originally negotiated?

The opposition is raising questions over the need to discard negotiations for 126 Rafale aircraft from DA, out of which 108 were to be made in India and to opt for the outright purchase of 36 aircraft from the same company?

The DA’s aircraft was selected after a long and unblemished process of evaluations and trials by IAF during 2009-10. The price negotiations for the acquisition of 126 aircraft started in 2012 that ran into a stalemate till 2014.

The squadron strength of the IAF kept depleting and had created a critical situation in its operational requirements with no immediate prospect of new acquisitions. Considering that we have hostile neighbors; India needed the aircraft and quick. Given this perspective, it was perhaps a pragmatic decision to call off the old negotiations and get the 36 off-the-shelf Rafale fighters.

Is the NDA government paying an exorbitant price for the 36 jets in comparison to what it was supposed to for 126 jets?

The simple answer is that there was no deal during the UPA government and thus quoting the price of the old “deal” itself and then comparing it is logically fallacious.

These costs are one off and will not be incurred for any future batches and any additional follow-on orders, without any doubt, would benefit immensely from these new conditions. It also includes AMC of simulators for ten years and training of IAF pilots and engineers.

The 2016 deal is for highly advanced versions of the Rafale (F3+), highly customized to operate in Indian conditions, compared to the original MMRCA was for the F2 version minus any Indian specific upgrades.

In the earlier proposal of the UPA Govt., which ended in a stalemate, there was no provision for transfer of technology but only to manufacture under license.

Furthermore, the NDA Rafale deal includes a comprehensive Performance Based Logistics (PBL) agreement wherein DA is legally obligated to assure that 75% of the IAF’s Rafale fleet is available for operations at any given moment in time. For comparison, in 2015 the IAF’s SU-30MKI fighter fleet had an availability rate of less than 50%.

It is true that the absence of a system of proactive disclosure of the defense deals have not helped matters and the procedural requirement is only to assess the reasonableness of the price quoted by the vendor.

However, to form a definitive opinion about whether or not the price, in this case, is reasonable, it is essential to see how it compares with prices offered to other buyers.

Qatar – The Rafale purchase price per unit for Qatar, including weapons, infrastructure, and training, but without country-specific enhancements. – Euro 262.5 Mn.

Even if we include the one-off costs in case of India, the per unit cost comes to Euro 218.8 Mn. So, where is the price mismatch?

6. Who will investigate if there is a loss to the public exchequer?

We must have trust in those charged with leadership and security of the nation and allow them to carry out their service than casting aspersions based on unsubstantiated allegations, crafted assumptions and labeling such a delicate defense procurement deal a scam, have both real and very damaging effect. We have institutions and systems in place to detect any irregularities where they exist. If indeed should there be any shortcomings in the deal, the Comptroller and Auditor General (CAG) shall highlight it in the future.

Why Reliance Defense and not HAL?

So, does it finally boils down to the selection of Anil Ambani’s Reliance Defense (DRAL) as the Indian Offset Partner (IOP) by Dassault?

In 2011 the US Ambassador had flagged the acute disrepair in HAL including lying & pilferage. The potential for HAL to successfully partner with US firms on a truly advanced aircraft remains untested and suspect,” US Ambassador, Timothy Roemer. Dassault has also been concerned over HAL’s capabilities.

It’s not the NDA government that refused HAL rather DA was reluctant for not being convinced about manufacturing ability of HAL and therefore unwilling to take the liability of the jet made by HAL.

Despite that at least till 2015, the NDA government tried to get DA to accept liability for the HAL manufacturing.

Did the Modi government favor the Ambanis?

We do not know if Dassault intends to discharge the entire obligation only through DRAL. The offset contract is between the MoD and the vendor DA, and the MoD has no role in the selection of the IOP by the vendor.

Under the contract, DA and its Tier-I/II companies have to discharge an offset obligation of nearly Rs 30,000 crore. They need able IOPs who can fulfill this mammoth obligation.

Considering that the vendor carries the full responsibility for discharging the offset obligation, it would be odd to believe that Dassault would choose an IOP who cannot deliver. It will expose DA to the risk of defaulting on its offset obligation that entails penalties and much more.

Though, I have no doubts that the situation could have been handled better. The fact is Congress party, and it’s mouthpieces in media are indulged in nefarious campaigns based on prejudiced perceptions rather than the hard facts.

Price wise the NDA Rafale deal is not only unquestionably reasonable but far superior to the earlier UPA estimation. If one looks into the 2016 agreement in its entirety, it can be firmly reiterated that the deal secured by the Modi Government is better in terms of capability, price, equipment, delivery, maintenance, training, and everything than what was notionally negotiated by the UPA Government in a process it could not conclude in ten years.

All you need to know about Rs 59,000 crore Rafale deal between India and France

SO WHERE IS THE SCAM? The reality of the NDA’s (now) controversial 2016 Rafale deal

An Examination of the Rafale Case: The Old Non-Deal and the New Deal